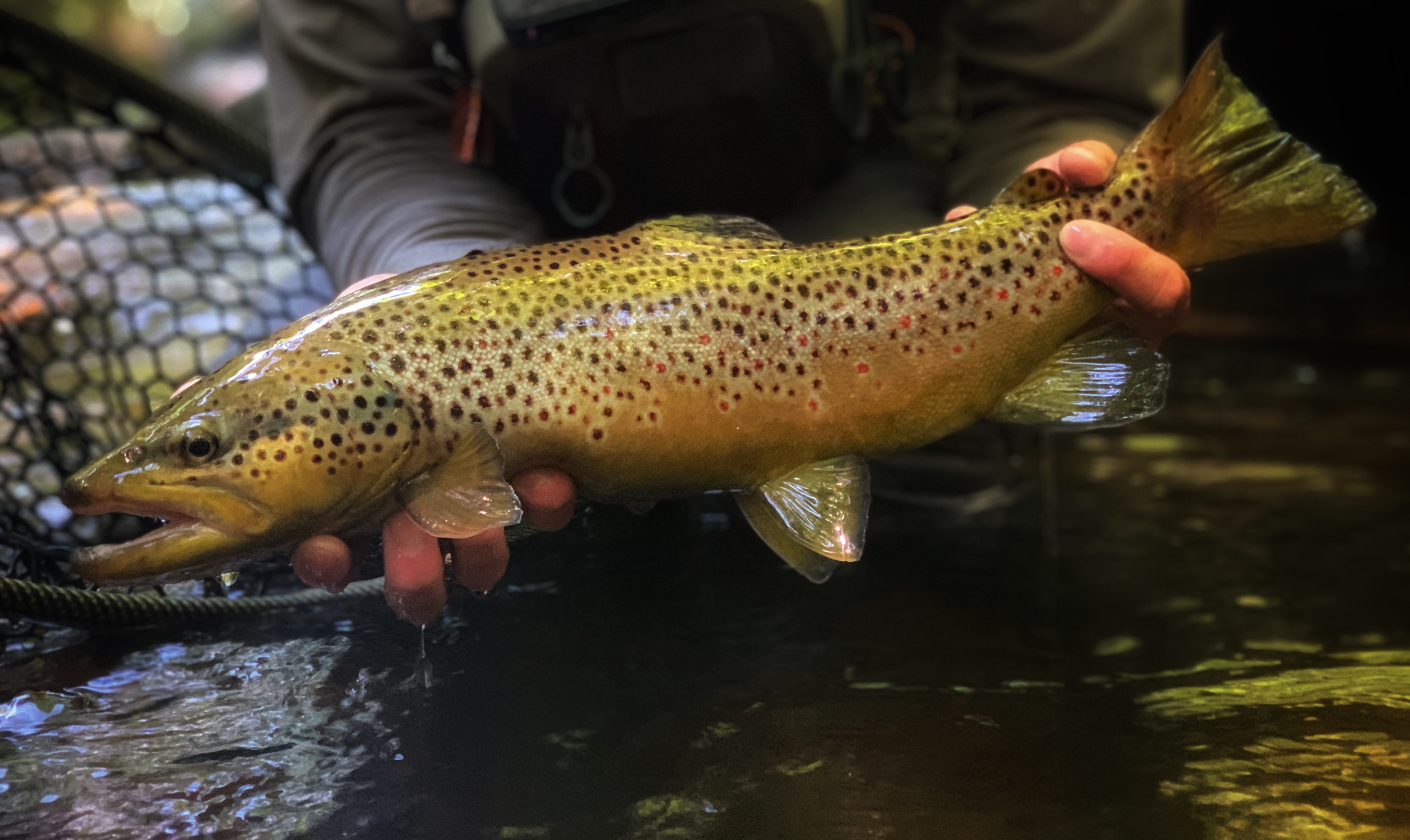 Its transition time out there; with the autumnal equinox happening, leaves changing and our local trout streams getting some recent shots of rain.  Within the past week, the trout themselves have shifted a bit in where they are hanging out.  Before the first shot of rain, most fish were located in the fast water, now with a couple rain events and some more cooler nights, we have been finding more fish on the current seam and in some deeper water. Water temps were running in the mid to upper 50’s yesterday on the two Otter tribs that I guided on.  During the recent bumps in water levels fish seemed to be liking nymphs and streamers, mostly of a dark color  and oftentimes swung in the current.  Dead drifting nymphs was also very productive.  The purple reign prince got lots of grabs this week, as did stoneflies, olive buggers, worms and some other generic nymphs like the Duracell jig and smaller rainbow warriors.  It seems that fish were on the feed and most good presentations got some looks.  I’m still seeing some tan Caddis around and on some of these rainy days coming this week, I would predict some good BWO activity, especially on the Otter Creek. Leaves in the water are starting to become a bit of an issue, but not terrrible; we will get that one or two days soon when it seems like every leaf in Vermont is in the water right where you want to fish, but it is usually short lived.  So far, things are shaping up for some really fine fall fishing, so forget about the lawnmower for a while and take the fly rod for a hike!

As we get further into fall, keep in mind that our wild brook and brown trout will begin their spawning activity.  Be mindful of redds as you are wading around on our local streams.  If you don’t know what a redd looks like, please take the couple minutes and search it up on the internet.  Another bonus is that with some spawning right around the corner, some browns from the Otter will be finding some suitable spawn habitat in tributaries.  If could give some of you a shot at the largest fish of the year.  Again, please be mindful of the actively spawning fish and the ethics of targeting that fish.  I think generally most fish in the Otter tribs spawn after the season closes, but it is something to be aware of.

Patterns to have on hand for the next week or so include all those mentioned above, as well as BWO nymph, emerger and dries, some tan Caddis larvae and pupa.  I find that I also will grab the iron lotus and Frenchie patterns a bit more often this time of year, especially as the water cools down even more. Streamers are also a viable option this time of year, especially as the fish that are getting ready to participate in spawning get aggressive.  Many folks like white this time of year, as any rainbow fry that survived over the summer are more active now. Again, focus on presentation.  Most of us while nymphing are still using lighter tippet, and fluorocarbon. Just because the water is cooling down doesn’t mean to up size your tippet.  That lighter tippet will get those nymphs quickly into the strike zone, which usually translates into more takes.

As always, feel free to reach out to me dave@mmvt.com or Steve in the shop.  Enjoy this week and have fun!  Cheers,