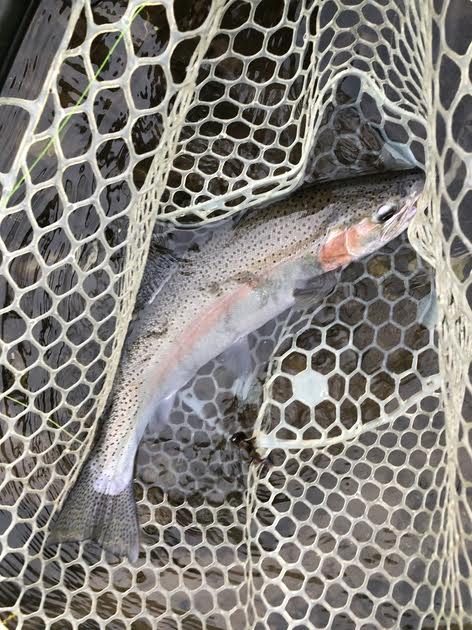 After a Busy weekend of guiding and personal fishing, here’s what the guides have to report and what to look forward to. First off, just two more weeks left of the regular season! If that doesn’t get you motivated to get out and enjoy some fall fishing, then I’m not sure what will! Last weeks rain definitely had the fish in an eating mood, but it was hard to pin down any one fly that did the most work. Worms worked in the more off color water, as did nymphed and swung streamers, but as things cleared, more natural bugs like October caddis patterns and Pt’s did the work. This seems about typical for this time of year, as the fish don’t really get too keyed in on any one bug, but will usually take well presented patterns. The Browns can be overly aggressive this time of year, and you can get some real good action on swung or stripped streamers. Many times the bite is more out of anger than hunger as they are preparing for the spawn and take more issue with other fish invading their territory.

As we move forward, the early part of the weekend looks the warmest and could offer the best fishing out there. Next week looks cool, but stable and during that period, look for better action (and more bug activity) during the warmest parts of the day. The Creek is high, but looks like its coming down, albeit slowly. I usually don’t consider it until it gets below 1000 cfs, and even then can be difficult. If you do decide to fish it, please be super careful. One thing I’ve noticed about the Creek at this flow is that while there are some fish that move toward the banks, some more fish stick to their usual runs, protected by the numerous current breaks on the bottom. In conditions like this I will usually leave the tight line rod in the truck and fish nymphs with an indicator. I can present my flies at a greater distance with the indicator rig, as the current necessitates my position being further away from my target. It can require frequent and long mends, but I’ve had some good success with it. A well swung streamer can also be deadly this time of year. If you are a switch caster or Spey caster, you really don’t need to wade very far to reach some prime water. Again, white streamers are many peoples go-to color right now. The white despite looking like a baitfish, also stands out against the myriad of leaves floating by, giving a great target for the fish. Nymph selection should include some mayfly type patterns(PT”s and lotus are favorites now), October caddis patterns (those with a soft hackle seem to work best), some of the uglies (worms, stones, eggs), small streamers to fish on your nymph rig and general attractor nymphs. Try some nymphs with a touch of orange this time of year as well; as with the white streamer many folks swear by orange in the fall. This could be as simple as a few turns of orange thread as a hot spot on your PT, or a turn of an orange dubbing in the fly.

If you are chasing pike this time of year, Ive had luck in recent years at this time of year finding fish near water coming into the Creek. This could be a smal farm ditch or a trout stream, but something about that area tends to stack up the fish. Most likely it attracts the bait and depending on the stream coming in, could be a few degrees warmer. Orange for pike flies is a good choice for fall too! Sense the color theme— must be the Halloween influence!

Regardless what fish your a chasing this time of year, its great to get out and enjoy it right now. Less pressure on the water, with many folks chasing birds, deer or ducks with bow and guns, or people just casing the rod for the winter. If you get out be mindful that hunters could be in the area. WIth any luck, after the regular season ends, the Creek’s flows will stabilize and we can have an awesome end of the year chasing some more Creek fish. Feel free to e-mail me dave@mmvt.com and check the shops social pages or stop in for a more up to date report. Cheers,